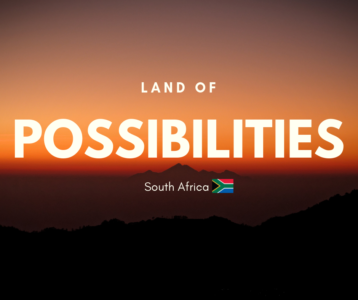 On Marelize, Woolworths water and young people who inspire us

Marelize laughs at herself, the Woolworths water drinkers make sure that we don’t take ourselves that seriously, and the EFF rubbish collector displays maturity well beyond his years. The youth inspire us, writes Howard Feldman.

South Africa is a magical country. It’s a place where truly anything can happen. And it so often does.

In the last few weeks alone, social media erupted with images of a pastor who demonstrated his ability to revive people from the dead. Truly. There is easy-to-access video footage of an (admittedly) fairly healthy-looking corpse that leapt to life following a short, but (obviously) very powerful, prayer, from an (obviously) very connected man of God.

Lookers on, watched with wonder and with disbelief as the newly dead arose, while few seemed to question the hard-to-miss movement of the corpse prior to his resurrection.

The sceptic in me wondered if he would be so capable following a cremation? The ex-commodity trader in me however didn’t dwell on that aspect but rather considered if there might be a new market in second-hand coffin trade – after all, many would now only be requiring them for very limited usage.

The campaign, although not finalised, would include comforting words like “gently worn” and “not so final, but still comfortable resting place”.

Charges against the pastor killed my little business before it got off the ground.

In the wonder land that is South Africa, the last few weeks have also seen new expressions magically appear and become part of our lexicon.

“My fok, Marelize” arrived out of thin air, following a painful sounding altercation with a rugby post. It came from nowhere, like a rabbit out of a hat, and in the lexicon it will no doubt remain.

If this wasn’t enough to thrill even the most sceptical, department store Woolworths, always on trend, has seemingly produced water that transforms and “metamorphises” people. Within just a few days, a video has gone viral and South Africa is loving it. It contains footage of three boys (who sound more like Julius Malema than Mmusi Maimane) are filmed drinking the water that has arguably more power than the pastor. On consuming the liquid something strange occurs.  Not only does their diction and enunciation become enhanced but also their vocab.

Words like “amalgamate” and “photosynthesis” dance off their tongues as they extol the “exquisite” quality of the water. They end by mentioning the “key competence of communication”. The clip ends with the boys changed forever.

Woolworths loved it even though it poked gentle fun at their own pretentiousness and South Africa loved it because it poked fun at our own judgement. More so, the country fell in love with the video because it displayed creativity, wit, the magnificence of our youth and that with everything that we are stressed about, we still possess the ability to laugh at our uniqueness.

There have been other videos that display the very opposite of this. A video featuring two EFF supporters (in red EFF t-shirts), throwing trash out of a bin whilst a young guy scurries to clean up the mess also got our attention. He patiently continued to collect the rubbish and they continued to deliberately continue to throw it out of the bin.

The EFF did not condemn the childish and surly behaviour of its supporters and instead (I believe) attacked journalist Karima Brown in order to divert attention away from this PR own- goal. They did this successfully and with our short attention span, we seemed to instantly forget about this one.

What is relevant is that in all these videos it is the youth who inspire us. Marelize laughs at herself, and in an interview tells us that she falls over every day. The Woolworths water drinkers through their video make sure that we don’t take ourselves that seriously, and the EFF rubbish collector displays maturity well beyond that of the adult rubbish throwers.

South Africa is a place of wonder. It is a place of magic. But we don’t need a fake pastor to pretend to bring people back from the dead in order for us to see it. Simply put, the youth is already doing just that.