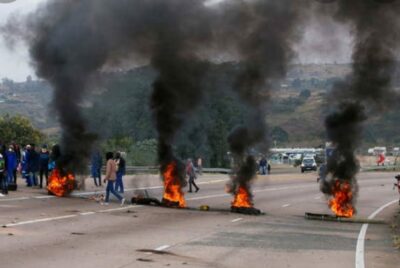 South Africans should consider reframing the July 2021 riots. Instead of looking at the situation as a massive failure of the ANC, SA intelligence and the security forces, there is an a completely alternative approach.

I submit that the July riots from the perspective of the ANC was a massive success. It was in fact one of their first events where they mobilized the nation, coordinated between different state entities, and managed to inject billions of Rands into the economy with the help of insurance companies. It was in essence a magnificent example of a public- private partnership and if one could ignore the fact that 300 people lost their lives along the way, it could even be considered a triumph.

It turns out that the July riots had nothing to do with South Africans and everything to do with South African politicians. The events were a direct result of the infighting within the ANC and the hollowing out of State entities responsible for the safety of the country and was not a spontaneous demonstration of frustration. What follows is that the 300 people who died in July 2021 did so at the hands of an ANC. Because they remain unable to get their act together.

At face value, the report into the July insurrection is damming. Led by Professor Sandy Africa, the panel found that the ANC’s internal contradictions negatively impacted governance matters.

According to the report,

“Perhaps the most significant input made, which we heard several times, was that what appears to be factional battles in the ANC have become a serious source of instability in the country. This is a matter of great concern and the reasons for this need to be identified sooner rather than later”.

Aside from the division within the ANC that led to the violence, the report also found that there were failures almost every step along the way.  The police were not only taken by surprise but were also inadequately equipped for the task. There was, according to the report a significant intelligence failure as well as a blurring of lines between executive authorities and security services.

One must wonder how the report was received by the ANC? Was there any discomfort and even a moment of real introspection and acceptance of responsibility?  Was there any time where the names of the lost 300 were read out loud and was there a moment of silence passed in respect of the dead. Did anyone shift nervously in their seats and was there someone who cleared their throat uncomfortably and was eye contact avoided? Did anyone within the ANC tentatively at first, but then confidently after, raise their hand and voice their shame? Or did the meeting (assuming there even was one), move swiftly on to how to sanitize the findings and consider options and diversions.

The report doesn’t mince its words. It in fact contains soundbites that should be printed at the entrance to anywhere frequented by members of the party: Outside Luthuli House and the Louis Vuitton store. It should be required to be learned by heart and recited before every ANC meeting:  “For their part, the security services are uncertain about how to effectively address this convergence of violent criminal conduct with mainstream politics, given the correct posture taken by the country to ensure that political activity stays free of state security interference.”

300 dead South Africans and billions of Rands in destroyed business is what you get when violent criminal conduct converges with mainstream politics.

A more cynical person might suggest that this might have even been one of the first “successful” events and programs carried out by the ruling party. If success can be defined by the loss billions of Rands and 300 South Africans. If that isn’t the view, then now would be a good time for the ANC to take responsibility, to assure the country that will not shirk its responsibility and that they will do their darndest to sort their conflict out before more South Africans get hurt.