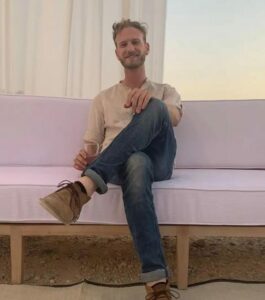 Sunday might have started off well. But it didn’t end as it began. Certainly not for the Kay family who would sometime during the day hear of the murder of their son Eli a 25-year-old who was gunned down whilst walking to work in the Old City of Jerusalem.

This is not my story. But it is sadly the story of the Jewish people. Eli Kay was a beautiful 25-year-old who was born and raised in South Africa.  Eli chose to live in Israel and in doing so, spent time studying the ancient tradition of his forebearers before   completing his national service.  He was currently working as a tour guide at the Western Wall, considered to be the holiest site for Jews. Eli was on his way to work when he was gunned down by a member of Hamas.

Eli Kay died because he was a Jew.

It is well known that the Hamas charter has called for the death of Jews. That call was answered by a known member who opened fire in the old City of Jerusalem murdering him. On the West Bank and in Gaza, following the announcement of the death, Hamas handed out sweets to celebrate. The situation is clear for anyone who chooses to see it. No nuance and no justification.

And yet, to date there has been no word from the South African government. Nor is there likely to be one.

The non- reaction of the ANC and the South African government stands in stark contrast to their hysterical response to the Miss Universe issue. It was in fact a week to the day following the wordy announcement that the ANC would be withdrawing their support for Miss South Africa competing in Israel, that the young man was killed. In it the ANC spoke of human rights, of dignity and of values. And yet, incredulously  the glaring hypocrisy of their silence seems to not bother them.

One has to wonder why. Is it because Eli was a Jew? And the ANC has managed, finally to morph itself into an antisemitic movement? Is it because once the ANC makes a decision who their friends are, that they will stand by them no matter the horrors or their actions? Or is it because they have been captured by haters of Israel who have not authorized them to comment? And who have not scripted the message that they seem to write whenever there is something negative to say about Israel.

It is almost unheard of for a citizen of a country to be murdered in a blatant act of terror in another country and for that country to remain silent.

Contrast the ANC’s approach to Israel’s reaction. The funeral live streamed yesterday showed more than 12 000 people in attendance. From all over the country they arrived to walk with Eli on his final journey in this world. Many, if not most, had not heard his name until the day before, and yet they left work, their homes and their towns and came to pay their respects. Israel’s Chief Rabbi Lau attended the funeral and addressed the family, along with a number of government ministers who expressed their grief and offered support to the family. Further members of parliament visited the family in their home following the funeral.

I never had the privilege of meeting Eli. I know his parents, his sister and his grandparents. I know his uncles and his aunts who are all respected and valued members of the South African Jewish community. A community still reeling from the murder of one of their own.

Which is why more than 3000 South Africans watched the funeral from afar. A funeral that was dignified and respectful. It was faith reaffirming and never once called for “blood.” It was respectable and it was respectful. It was a testament to the generations of committed Jews who understand that the commitment to an ancient faith can be costly.

Many in the South African Jewish community are known for their activism in the battle against apartheid. Many are known for the commitment to the greater good and philanthropy. Many are business leaders who have provided employment and opportunity. And yet the ANC, by their silence when one of us is murdered for our faith seems content to send us a message that we don’t matter.