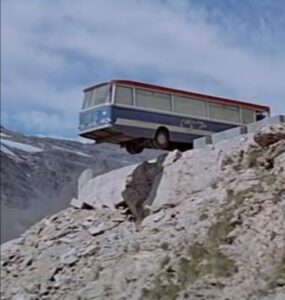 Not for the first time, South Africans have been left scratching their heads and wondering not only who is driving the bus, but where we are being driven to. The decision to continue the State of Disaster in terms of Covid-19 has left passengers perplexed and unnerved. Especially as it echoes back to the early days of the pandemic when cooked chickens and open toe shoes were added to the banned list.

A generous interpretation on the edict is that government has once again fallen asleep at the wheel, so exhausted they are from the responsibility of the load it has been carrying. A less magnanimous one would be to wonder why they have the need to control the people of the country in ways that they seem to enjoy? And what it is that they have to gain by doing so?

The facts seem fairly simple. Covid cases are down, a significant percentage of the population has immunity from either vaccines or from having contracted the virus itself. Around the world, country by country, restrictions are being removed and life as it was known is returning.

In South Africa the experts all seem to agree that the dangers presented earlier on in the life cycle of the disease are no longer present, given the vaccine, variant, and natural immunity, and that it is time to remove many of the restrictions. So much so that It is hard to find a medical doctor who still recommends that masks should be worn outside and many believe that aside from the severely compromised, they are not needed inside either.

Simply, the mask mandate should end.

I confirmed the stance this morning on my talk show in a conversation with Prof Shabir Mahdi who feels strongly that there is no need for masks as well as other precautions, aside from those who are immune compromised. Ahead of the government announcement, he was hopeful that it would change. Unfortunately, It did not, and the state of disaster has instead been extended to April 15th.

Pulmonologist, physician, and front line Covid expert, Dr Anton Meyberg shared the view, “It is unfathomable to me that the regulations have not been changed. We have rightfully asked a lot of people in terms of compliance over the last two years. It is unfair on them to continue these rules when there is simply no medical reason to do so.”

The University of Stellenbosch’s Jo Barnes added his thoughts to the chorus of those saying  that the state of disaster was  no longer necessary.

“What they have done is taken control of the pandemic under very high political control. There’s this great amount of secrecy about the decision-making. There is a Ministerial Advisory Committee giving government advice on what to do but the government cherry-picks what it wants to do and leaves the others,” Barnes said.

Concerning words. And ones that speak more to a deliberate power based decision rather than the “asleep at the wheel” option, which strangely makes me more comfortable. I would much rather the explanation be one of incompetence and lack of focus than something deliberate and potentially more sinister.

We have after all, been taught not to trust. Misappropriated Covid funds aside, there is a history of dubious decisions with regard to the pandemic.  We have never understood, nor been gifted with the explanation as to why the sale of cigarettes were banned in the early part of the pandemic. Many a theory was voiced and aired and although not proven, still did little to bolster confidence.

Nor did we ever understand why the empty beaches were closed to the public, but the more populated ones were allowed to remain open. Whether this was simply poor and irrational decision making is something we are unlikely to know for certain, but what we do know is that doubt and mistrust almost always fills an information vacuum. If you don’t provide an explanation then people will make up what is missing. Absence of information is almost certainly going to be filled with theories and conjecture.

Hardly a smart move for a government with a pre-existing image problem. Or comorbidity.

The pity of it all is that government has largely done a decent job of handling the pandemic. The vaccine roll out whilst imperfect has been successful with all South Africans over 18 having been provided the opportunity and means to receive cover. Hospitals were equipped and coped well even during the hight of the waves, and even thought the “family meetings” could well have been an email, they still unified served the country in our focus and goals.

But all the goodwill and achievements will soon evaporate and will be for nought if the state of disaster is not lifted.

The reality is that state of disaster or not there is no longer compliance. When the experts no longer understand the regulations then it is impossible to expect the population to follow them. There is an urgent need for someone to wake up the driver of this bus and let them know, in no uncertain terms that their shift is over.A