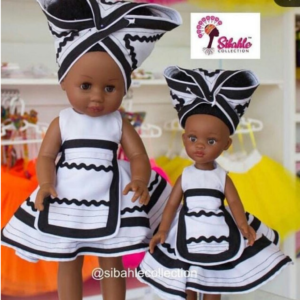 I have always been a morning person. Which is why I genuinely hate being called a racist before 7:00am. Especially because I am not one.

To be fair I also hate being called condescending so soon after sunrise. But in terms of that allegation, I am not convinced that I have a leg to stand on.

This is what happened this morning. My day starts at 4am when I scan various news sites, social media and look closely into various stories to discuss on my morning show.

It was whilst on Twitter that I happened upon a tweet by @TheBlackProtector. I guess the name should have indicated that no conversation was going to progress simply. The content of the tweet featured a photo of 4 black dolls dressed in the most magnificent outfits. I was immediately captivated and wanted to see how I could help to boost this business. The text read as follows; This is the Sibahle Collection of black dolls. We must support this black business with all our might. It is located in Johannesburg, Randburg and Ferndale Village. You can order online. Black dolls for black babies. Black power!”

I fully understand the history around this issue. Simply put, black children have been deprived of dolls that they have been able to identify with. It was (and to some extent still is), part of a multi layered, but powerful system of racism that inculcates “otherness” from a very young age.

Much of my corporate work focuses on the challenges that women face in the workplace and especially black women who often are confronted with barriers that are either misogynistically or racism based. Sadly, in many cases both are evident. Even if it subtle.

My reaction on seeing the tweet was two-fold. At 5;57am I sent The Black Protector a private message introducing myself and explaining that I am a morning talk-show host and would love to feature and boost the business. I ended with the words, “How can I help?”

To the tweet I responded,
“I love these! And fully intend supporting this business. And I love your tweet until you get to the ‘black dolls for black babies’ part. You might want to consider if that is the best marketing strategy? Either way – how do we get hold of them on line?” To which I received the response, “You must not know me (I admit, I don’t). I tweet solely for black people (umm, that’s not how Twitter actually works) &My tweet about black dolls is not part of a marketing gimmick (not sure that I suggested it was). It is part of the agenda to restore dignity & self worth of black people (I can get behind that). BLACK DOLLS FOR BLACK BABIES (alrighty, I heard you. No need to shout).

Another Twitter user responded “This @HowardFeldman chap is condescending and racist! Who asked him”? The beauty of Twitter is that one doesn’t actually have to be asked in order give a view so the question hardly bothered me. What did perplex me is how they know I could be somewhat condescending and on what basis they would suggest that I was racist? Have a different view is hardly grounds in of itself.

Another Twitter user was outraged. “What, black babies can’t have black dolls?!?!??” and then proceeds to explain to me why it is important that they do. The same person then challenged me to “put my money where your mouth is and buy some.” This was becoming more than a little frustrating. Especially in that in each response and in the private message I had asked for the company details so that I could do just that. But that request was unanswered.

It wasn’t even 8am. And I was exhausted.

With all the grandstanding. And with all the bluster and all the aggression, the doll maker had not been helped.

And I wondered if this wasn’t a symptom of the greater problem.

Here’s the link to our thread