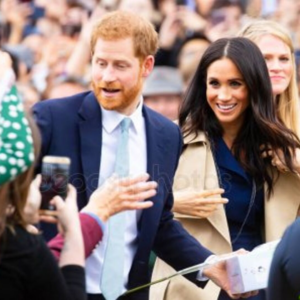 I am trying to muster all the positive energy I am able, and to get on board with the excitement about Royal’s visiting South Africa. But I am failing dismally. Harry and Meghan Markle have only been in the Cape for the last three days but somehow it feels much, much longer. I am exhausted by the amount of footage. And I am not even in Cape Town.

At time of writing, 7 babies had been publicly kissed, 4 moms hugged, and 27 tears shed. On no less than 5 separate occasions Meghan has been recorded spontaneously breaking free from her discussion, stopping the cavalcade or interrupting an interview to rush to the side of a rather poorly looking South African. All these numbers are fiction, but that’s what it feels like to me. If I have to see another burst of maternal spontaneity from the Meghan, I might throw up.

I happen to like the royals in general. I have watched the Crown and Dianna and might even have cried when the Queen of Hearts died tragically in a tunnel beneath Paris. Like many, I was hoping that she would have found her happily for ever after. So connected am I, that I often find myself humming the tune of Candle in the Wind when a melancholic mood overwhelms me. I have no other explanation as to why I would possibly do that.

It’s not like I am a massive Elton John fan.

I really want desperately to glow in the warmth of their royal rays and want so badly to feel touched by the darn down- to-earthiness of them all. But I can’t seem to manage. Because all I see is a meticulously staged public relations exercise, conceived by the couple’s agency and acted out by a ginger man and his actress wife.

I hate myself for it. I really do. I don’t want to see that the emperors have no clothes. I want them dressed in their finest of finery, tiara and all, so that we can all carry on pretending that they are not naked. Or worse than naked, because it cannot only be me who thinks that Megan looks like she shopped for this trip at Mr Price’s End of Range sale. Either that or her bags didn’t arrive on the commercial flight they were forced by their publicist to take, and so she had to stop at The Blue Route Mall in False Bay to pick up something to wear, before her real bag could be located.

The alternative is that Meghan is appallingly patronising in that she seems to think that she has to dress down for us. She seems of the view that South Africans will only connect to her if she dresses poorly.  Like we don’t know or deserve better. She forgets that we are the people who birthed Evita Bezuidenhout and Bonang; who might well have spoilt us for all other queens.

The couple have been called out on their apparent hypocrisy. The British media have lambasted them for being quite happy to fly on a series of private jets whilst lecturing the world about carbon footprints and the environment. Until today, they were quite willing to showcase other peoples’ babies whilst theirs remains safely out of sight. That is until the meeting with the Archbishop, when they could maximise Archie’s first photo opportunity.

To add to the absurdity of it all, yesterday’s British Daily Mail described how Harry told an 18 year old he chatted to in a mosque in Bo Kaap,  Cape Town that he sometimes feels so “overwhelmed” by problems of the world that he “Struggles to get out of bed.” He actually said that. I would love to have seen the expression on the kid’s face when he heard those words. He had to have thought that Harry was pulling his leg. More so, I would love to have heard the language and dialogue that played through his mind. Could Harry really have thought that the 18 year old would feel sympathy for the poor Prince? I could see him imagining Prince Harry, at Frogmore Cottage, in his bed of crisp Egyptian cotton tormented by the burden of it all.

I am certain that the 18 year old must have rushed home to tell his family that they need to be grateful for all they have, and everything that they don’t. Because it could always be worse. They could after all, be a British Royal. And I am certain that they nodded their heads sagely and whispered, “There but for the grace of God, go I.” or “Us” Or “Ons”

I have written books on positivity. I write articles on it incessantly. I love the heart warming stories that connect us as South Africans and as citizens of the world. But even I have my limits. And this royal parade is just one staged managed step too far. Even for this nauseated optimist.