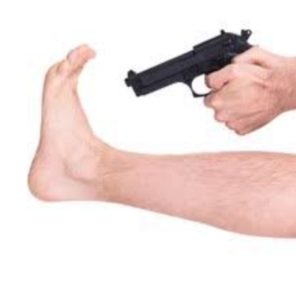 If shooting oneself in the foot were an Olympic sport, South Africa would be world champions. There would be no waiting around for our swimmers and surfers to rescue us from mediocrity. Before the games even kicked off, we would be ready to mount the podium. Time and time again we would receive gold. Because we are just that good. And well trained at shooting ourselves in the foot. After all, we have been doing this from way before Covid was even a twinkle in anyone’s eye.

For sake of good order, Foot shooting of oneself is not an approved Olympic event. At this stage at least.

Consider the following. When Covid was unleashed upon the world, South Africa wasted little time in banding together. All political parties, most citizens and even the ANC stood resolutely behind the president. We trusted his intel; we believed his assurances that this time around everyone would be honest and we suffered through the oppressiveness and irrationality of some of the edicts. No cigarettes. No exercise. No beaches. And we stood by because we were in this together.

And at the end of the day that’s what counts.

Only it didn’t count. Because while we weren’t walking our dogs and whilst we were unnaturally sober, the foot-shooters were competing to see how much of the funding they could steal. Competition was fierce, but training and years of practice won out as any athlete will tell you. It always does. And so, the money was stolen in a veil of masks and protective clothing, and an embarrassed president stood up in front of the nation, this time a little sheepishly to tell us that we had in fact been shot. In the proverbial foot.

But that it wouldn’t happen again. He assured us. And we almost believed him.

And yet it did. This time it was the Minister of Health with his digital vibes. And so, it would continue. Because you can’t ask an athlete in their prime to stop doing what they have trained to do. It’s too big an ask.

In its latest filings, the SIU is severely critical of the manner in which Digital Vibes clinched the deal. “The procurement process undertaken to award the NHI contract was deeply flawed, unlawful and invalid and appears to have been rigged to ensure the appointment of Digital Vibes,” according to the unit.

Digital Vibes it would appear, seems to have been irregularly favoured in the bidding process.

According to The Daily Maverick, who have investigated this extensively  Digital Vibes’ main rival “was irregularly and incorrectly disqualified from the NHI tender evaluation process”, according to the documents.

“Perhaps most shocking is the fact that the DoH picked Digital Vibes over one of its vastly more experienced rival bidders, which offered a significantly lower bid price of R69-million”.

At R141-million, Digital Vibes’ bid price was more than double that of its rival’s. The result is that the firm ultimately pocketed R150-million from the department. And whereas in terms of the size of the numbers in the South African competitive field, this would hardly even bag a silver medal, the callousness of the timing and the disrespect to the president should at least place them in the finals.

We achieved a bullseye with our rejection of the AstraZeneca vaccines, with our initially slow rollout. Whilst other countries were vaccinating and getting people back to work, we debated vaccine apartheid and lamented that we are poor. Forgetting that we only were devoid of wealth because of the looting. But then we got that right, vaccines started to flow into the arms of those who needed it. And for a while it was looking hopeful.

And then came the riots, the insurrections, the looting, the theft and the wholesale destruction of property. The arrest of former President Jacob Zuma happened at a snail’s pace. It could not have been slower. The signs that trouble was coming was there for all to see. But we chose not to. We chose to not see the proverbial gun being loaded. We chose to not see that  aim was being taken. We chose to do nothing that could have prevented the shot from being fired.  And so for a week the country burned. Citizens defended their properties with cooking oil and home-made weapons. Food ran short and  we wondered if this time we hadn’t gone too far? If this time we  hadn’t crippled a country that was capable of running.

The insurrection or riots or looting ended because South Africans had enough. Instead of tearing each other apart they put each other back together. They assisted, the protected and they made it clear that our neighbours feet will not be shot at.