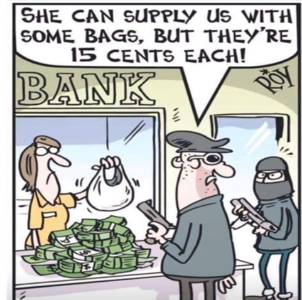 The City of Johannesburg has just announced that the city is going green. Soon, they tell us, residents of the city will be recycling the hell out of everything. Undoubtedly, the Mayor expects a cheer from those who care about plastic bags and Abalone and stuff. But they are not going to get one from me. Not yet.
Because there is no chance that I will recycle in the dark.

I know that I am meant to care about conservation. I know that I meant to recoil at the very thought of a plastic bag. But the honest-to-God truth is that if I never see another Abalone (or Perlemoen) so long as I live, I am pretty certain that I wouldn’t be the worse off for it. And before anyone screams anything about the next generations, I can say with confidence that if either my children or theirs lived in a world where Abalone didn’t exist, I am reasonably confident that they could still thrive.

I cannot even say with any certainty that I have even ever seen an Abalone. That is aside (maybe) in the ugly seventies when we stayed at the not even then famous Van Riebeek Hotel in Benoni where we stayed for one awful weekend for a family function. Or something. I think that there is a chance, that at the end of a dark passage, just past the bar, on the left (that we were warned not even to look into), there might have been a threadbare couch with a tea doily on the arm. The chair must have been frequented by smokers, because there was most likely a little table next to it, on which there could have rested an ashtray. And that ashtray could have been Abalone.

The focus on the environment is no doubt important. But residents of the Johannesburg have a lot to contend with. I can’t help thinking that with all we have to stress about in the form of crime, infrastructure collapse, that sure the one thing what we have the privilege of NOT worrying about is plastic bags in the ocean. Surely now that the Capetonians have water, they can focus on this? We simply don’t have enough time in the day to add another stress.
As an aside, I also can’t help thinking that if Syrian Children who are being slaughtered and orphaned and left destitute would be seen as important as plastic straws, maybe the world would be a better place. But that’s just me
So here it is. This is why I am somewhat cynical about the new recycle initiative.

Until:
– I receive water when I turn on my taps
– Light when I switch on my lamp
Until:
– Our roads are not pockmarked with potholes the size of the Eastern Cape
– Our residents of Alex have reasonable service delivery
– Our public hospitals can provide acceptable healthcare to those who cannot afford private healthcare
– We have adequate schools for residents who are desperate to educate their children
And: Until:

The City of Johannesburg starts to communicate with its residents as though they are adults. I find it difficult to get behind a project that is no doubt wonderful. Because I will NOT be recycling in the dark.
Johannesburg has seen power outages greater in the last week that we have ever seen before. The City Power Twitter feed is now NSFW (Not Safe for Work) as resident’s anger and frustration builds. Communication has been appalling as Joburgers forage for scraps of information that will calm and inform them.
Businesses without a back up generator might as well close their doors because the cost of staying open is too great when you can’t make a sale. Restaurants are suffering as not only are residents of the city going out less because of the unpredictability, but even when they do, they might be forced to leave a venue because of lack of power. People are despondent and negative. And it’s winter so they are cold and irritable too.
Which makes the timing of the launch of the recycling campaign a little tone deaf. Whereas there is little doubt that the new initiative is forward thinking and wonderful and might even save the Abalone from plastic bags (or at least straws), I am certain and confident that I will not recycle a darn thing whilst in the dark.