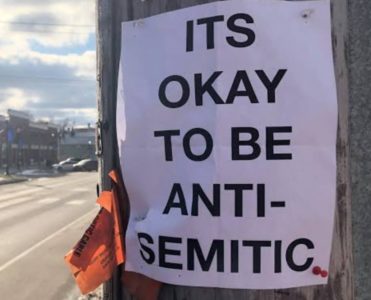 I hate writing about anti-Semitism. I hate it because I believe in the good of the hearts of South Africans. I believe that as a general rule, South Africans are not racist, or Islamophobic or anti-Semitic and that we all want what is best for ourselves and for each other. The risk of focusing on anti-Semitism  is that it publicizes hate by giving it a platform, and might create the impression that this is the norm, rather than the exception.

But there are times, when I feel I have no choice. Because to remain silent is to allow prejudice to go unchallenged.

Here is some context. The Judicial Service Commission is meeting this week to interview candidates for judicial appointments. Nine candidates will be interviewed for two vacancies at the Constitutional Court. One such candidate is Judge David Unterhalter, who Until his 2018 appointment as judge of the high court in Gauteng had been one of South Africa’s foremost silks, having appeared in various high profile cases which have landed up in the Supreme Court of Appeal and the Constitutional Court.

His Jewishness, while unlikely a concern to most in South Africa, is apparently intolerable for the South African Boycott, Divestment and Sanctions Coalition who were quick to make the following statement:

“The South African Boycott, Divestment and Sanctions (SABDS) Coalition places on record its objection to the candidacy of Judge David Unterhalter for appointment to the Constitutional Court principally on the grounds of his association with the South African Jewish Board of Deputies (SAJBD”

For sake of clarity, the South African Jewish Board of Deputies, according to their website is “the umbrella representative spokes body and civil rights lobby of the SA Jewish community. It promotes the safety and welfare of South African Jewry, including combating anti-Semitism in all its forms and builds bridges of friendship and understanding between Jews and the broader South African population.”

The SAJBD represents close to 90% of the South African Jewish community. They actively participate in the well-being of schools, Jewish aged homes, burial society, and welfare. I do not sit on their board, but through community involvement, I have witnessed some of the magnificent work that they have done. Not only in representing the Jewish community to government, but in their acts of kindness towards fellow South Africans when most needed. From charity, food campaigns and education, the Jewish Board of Deputies is one of the first to show up and to assist.

In terms of Israel, they are openly supportive of a two state solution.

Very clearly, for the BDS, association with the South African Jewish community is enough to preclude any candidate from a position. The implication is very clear; Jews who identify as such, are a risk. They are not to be trusted. And they must be precluded from performing certain roles.

The exclusion of Jews from public office, whilst horrific, is not a new idea, and has been deployed throughout Jewish history.

And it never ends well.

The BDS statement makes no attempt to hide it’s Jew hatred and concludes as follows “Appointing Judge David Unterhalter to the Constitutional Court will be a grave mistake and will send a wrong message to South Africans and people around the world that share an international commitment to the universality of human rights. We urge the JSC not to grant an interview to Judge Unterhalter. If they do grant him an interview, they should render an emphatic pronouncement that he is unsuitable for appointment to the Constitutional Court.”

I hate writing about antisemtism. But there are times when it is my duty to do so. Any ambivalence I had was settled by the famous words of German Lutheran Pastor, Martin Niemoller.

First they came for the socialists, and I did not speak out—
Because I was not a socialist.

Then they came for the Jews, and I did not speak out—
Because I was not a Jew.

Then they came for me—and there was no one left to speak for me.

I don’t recall if I have ever met Judge David Unterhalter. I have no idea if he is the candidate of choice for the Constitutional Court or if there are better options for this position. What I do know is that to exclude him on the basis of his religion is to make a mockery of the very institution that he is seeking to represent.