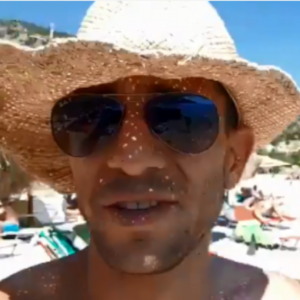 If you are not a racist off social media, it is unlikely you will be one on it. This is the message that I give to students and participants of my workshops when discussing various mediums. I have found that the perception exists, that even unwittingly, the most innocent might walk into a Twitter storm.

Of course it can happen, I explain. But it most likely will not.

You have to be a racist, to post racist material. It really is that simple.

And yet, somehow it is a trip to the beach that seems to be the trigger for some South African racists. Remember Penny Sparrow? That was all about the beach and the fact that she didn’t approve of who was sharing the space with her.

I had not heard of Adam Catzavelos until this morning. He is the latest South African to ignite a social media storm after he posted a selfie-styled video that appears to have been taken on a beach somewhere in Europe. Adam sports tear-drop Ray-Bans and an odd straw sun hat, and has a tattoo on his one shoulder. He looks quite cool and positively carefree. He is no doubt enjoying his holiday and until he starts to speak, one is almost drawn to him.

To add to the setting, the sea looks gloriously inviting, the beach appears comfortable, with straw gazebo dotted around, and weather looking magnificent.

Given the privilege of the holiday and the environment, one almost expects Adam to speak of gratitude and to note and count his blessings. One expects him to speak of love for his fellow, and send a message of positivity back home to South Africa. What he does is the very opposite. Almost immediately he descends into vile and gut-wrenching racism that is honestly very difficult to witness.

What is worse is that he does this with such ease that we know that he is not a first offender.

Adam “observes” with his finger-wagging emphasis, that there are no “k*ff**s” on the beach or anywhere near. He seems pleased with himself for noting this and unbothered that his language has the potential to hurt and to damage and drive apart a country that for the most part is so desperate for unity.

As an observer of people, I often find myself wondering what someone could have been thinking when they did something, said something or even wore something. I try to get inside the head of the person and view the world from their perspective, even though I know it is impossible to really do so.

To be clear, there is never an excuse for an Adam’s or a Penny’s utterance. But we do know that it is more likely that a person will say racist things when they themselves are insecure or having a bad day. It is an immature and aggressive way of lashing out, and although it cannot be justified in any situation, ever, we are less surprised when it occurs under those circumstances.

Which makes Adam’s video even more appalling and even more evil. He was not speaking from an emotional space. He was “rational” and happy and enjoying his best life, all while spewing hatred towards his fellow South Africans.

There is also no way of knowing why beaches seem to bring out the worst in racist South Africans.

All I know for certain is that this conversation is far from over. All I know for sure is that we need to engage in the dialogues that are often so much easier to avoid. Until then, I am going to be nervous of beaches.

This article was originally published by News24.com