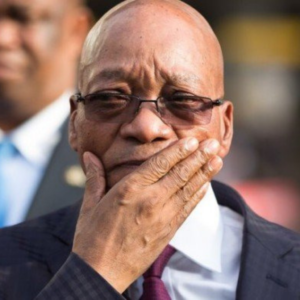 Maybe have it all wrong. Maybe the ANC doesn’t actually want to govern. And maybe we have missed all the messages that they have sent to us over the years. And maybe they are so exasperated and fed up that they keep finding themselves with a country to run, and no intention of doing so.

It’s the only way to make sense of the endorsement of the ANC by former president Jacob Zuma. And yet in the Topsy-turvey world of South African politics, the announcement was met with hardly a blink. Or a blush, which would have been the most appropriate response of all.

In my mind’s eye, I can picture the meeting. It’s the last session of the ANC marketing campaign get together before they launch their 2021 Local Government Election drive. Everyone is comfortable, and the strategy is clear. It boils down to “Look forward, so they don’t ask us about the past. Unless it’s pre-1994, and then they can as us anything.” It’s sensible and it’s safe. And it’s never failed the movement before.

“Any final comments or questions?” I imagine the chairperson asking, car keys in hand and with one foot out the door. Much like the party itself, he isn’t listening and isn’t really expecting engagement. And much like the leader, he is shocked when he gets any.

“Um,” says a voice at the back of the room. He is clearly uncomfortable, but he has been given one job. And he has no choice but to complete the task.  “Former President Jacob Zuma would like to join the campaign.” He finally suggests.

I imagine the chairperson contemplating what he has just heard. I imagine glances being shared and I imagine those who have fallen asleep starting awake, as if woken by the shift in energy in the room. And then I imagine everyone nodding sagely, each justifying their lack of courage to counter the proposal, and then everyone agreeing that it is indeed a truly wonderful idea.

Because what could go wrong?

And so it came to pass that Jacob Zuma publicly endorsed the ANC. As if it was the most natural thing in the world, as if there was not even a whiff of impropriety that accompanied his reputation and as if he hadn’t been released from prison under dubious circumstances.

IOL reported the incident. “President Jacob Zuma has publicly spoken out for the first time since he was granted medical parole early last month and pleaded with people to go out and vote for the ruling ANC in the upcoming local government elections.”

In case we might have considered that the leadership of the ANC would have had enough self-awareness to be even a little uncomfortable, that was very quickly put to be. According to the SABC, on October 9th, ANC President Cyril Ramaphosa says while he has not seen the video of former President Jacob Zuma encouraging people to vote for the ANC, he welcomes the message from the former president.” The “seeing of the video” was, of course, not relevant. But it signaled the discomfort of Ramaphosa. Had he been genuinely thrilled, he would never have needed to qualify his statement with the disclaimer.

There is so much wrong with Zuma endorsing the ANC. But for me, the worst part was that he didn’t even pretend to look sick.. My school going kids, pretending to have a stomachache to miss Sports Day have done a finer job in at least trying to convince us of their ill health. Their voice goes a little quieter, maybe a little croaky, and they invariably hold on to some part of their body. As if not doing so would cause unimaginable horror. But Zuma, even having recently been released on “Medical parole” which denotes a grave and terribly serious illness, possibly even one of the fatal kind, didn’t seem to so much as bother. He put in no effort to play the part and in doing so sent an obvious message to the ANC and to the country. He made it known to all that once again, he was having the last laugh.

The only explanation is that the ANC does not want the job anymore. They have little positive to show for the 27 years that they have governed. They are not a happy and not a unified bunch. .. Sadly for them, no matter what they do, the nation keeps voting for them, which means they need to increase the sabotage until South Africa has enough. To be fair, they have tried to do whatever they can, to convince us they are not fit to rule, but no matter what, they keep finding themselves in the same position. With a country to run, but no actual intention of doing so.

Perhaps it’s time to grant the ANC their wish. Let them hold on to their reputation of being a liberation movement, and let someone who actually wants to govern do so.