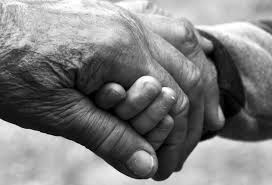 My grandmother spoke German in secret. She also smoked behind an old fig tree in the garden and then sprayed her “4711” perfume all over herself so that my grandfather would be none the wiser. There was no doubt that “Opa” was well-aware of her habits, but it was easier for him to ignore them rather that to confront them. German was the language of his past and it was best that it remained there.

My grandfather’s aversion to his mother tongue was visceral and even as children we understood, despite his protestations, that it has little to do with his belief that English was the language of the future. He spent most of his life suppressing the emotions that smouldered within him. And how better to place distance between himself and his past than to ban the sound of his childhood. We also knew that my grandmother smoked to control hers.

Both were physical survivors of Hitler’s Europe. Both came to South Africa just before the war.  Without family. They met and they married.

Because it was better than living alone.

Thursday April 12, 2018 marks Holocaust Memorial Day. On this day, Jews around the world spend 24 hours devoted to the memory of the six million who were cut down during the second world war. Commemorations and ceremonies are held wherever Jews might live. In Israel, home to the largest survivor community, Sirens sound and the country stands in silence as they remember their dead.

It is a sombre and a painful day.

My mother was home from school when the envelope arrived. She was recovering from scarlet fever and had spent the last few weeks in bed. The war had just ended and she was hopeful that now that it was finally over, that she might be able to get the new doll she had dreamed of. Letters had stopped arriving from Europe some years prior, and my grandmother had begun to suspect the worst. She had not heard from her sister or parents for too long, and there seemed to be no way to track them down. Each day she prayed for word. But none came.

It wasn’t good news. The letter had been sent from the Red Cross. And it confirmed that her family had all perished. There were no bodies to bury. There were no graves to visit. But there was closure of sorts. The letter concluded with its sincerest condolences.

It was the only time that my mother saw her mother cry.

That night when my Opa came home, supper was ready to be served, the children had been bathed and were now ready for bed.

They said “Goodnight” in their perfect English.

My grandparent’s story is far from unique. They were survivors in the strongest sense of the word. They would ultimately build a strong and close family, they would build businesses and they would contribute to society in a positive and meaningful way.

But they would also pass on their damage and their fear to the next generation who would ultimately find a way to compensate for it and who would over correct it for the next. 1940s Europe is in fact so deeply coded into every Jew of European ancestry that it is unimaginable as to how long it will take to eradicate the pain from the collective Jewish memory. If ever.

This Holocaust Memorial Day I am taking the time to not only try and contemplate the vastness of the murder of six million people and to not only to honour the memory of my late great-grandparents who never got out of Europe, but to also remember my grandparents. My lonely grandparents who survived physically. But who also spent the remainder of their lives never speaking the language of their lullabies and other times smoking in secret behind that old fig tree.  Before covering it all up with a spray of 4711.