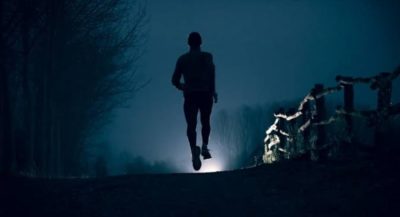 This is a public safety announcement.

One of these days I am going to be late. And it will be a runner’s fault. Because for whatever reason, some athletes amongst us don’t seem to realize that the weather has changed, and that it is now darker in the mornings. And that whereas black clothing is slimming, it is far from the best choice if visibility is a concern or even a value. As fast as road runners might think they are, it is unlikely that they will out-move a moving vehicle. Especially one that hasn’t seen them.

Simply because they are not wearing reflectors.

As a breakfast show radio host, I leave home each morning for the studio around 5:15am. Lately I have been forced to dodge people for the majority for the short drive in. Some mornings it’s like an obstacle course and on others it’s more like the Rand Show back when it was on West Campus, with people and their pets taking advantage of the beautiful early mornings that we are blessed with. It is truly wonderful and there is something inspiring about seeing so many motivated and enthusiastic souls.

It would be a real shame if one of them didn’t make it home for their carb free -smoothie.

I have raised this concern on air several times recently, but I always seem to do so early in the show when the target audience is more than likely hitting their 5 minutes and 30 second per kilometer stride in blissful ignorance. In the absence of the runners themselves, I have tried to appeal to spouses and partners and parents and children of runners with varying success. Which is why I have used this week’s column to add to my plea.

If you love a runner. Or a walker. Or anyone who chooses to be out and about in the early morning or early evening, do not let them leave without some sort of reflector on their person. If you love one of them, do what you can to prevent them from leaving if it’s without safety gear. Stand in front of the door, hide their 4 pairs of running shoes, or anti chafing cream, or feed them hidden carbs the night before if you have to. But make sure they comply.

If, however, you live with one, but don’t love them so much, then feel free to pretend that you didn’t read this, and we will never speak of it again.

It is interesting to note that in my one-man mission to light up our neighborhood runners; I have chatted to a few shady (reflector-wise) individuals. The response was always the same. “Thank you for pointing that out. Now that you mention it, it is darker in the mornings.” Which is a good sign. Because it means that the athletes that I have spoken to, would actually prefer to live past 6am. Even if it’s just to run another day, manage another “PB” and Strava-shame their best friends. Because they can be like that.

It is accurate for me to say that some of my best friends are runners. Which qualifies me to state that they are mostly intolerable, annoyingly obsessed as well as arrogant, as a whole. Some individuals may differ. But I find that hard to imagine. They will also always judge anyone with a slower time than theirs.

It is also accurate to say that many runners have partners, who are one running conversation away from running into oncoming traffic themselves. Just to end it all.

But on the most part, neighborhood runners add to the fabric of communities. They are reliable, enthusiastic, and filled with the optimism that we all crave. I would hate to lose even one of them to an oncoming car that didn’t see them before it was too late.

This is a public service column. It seems such a pity to spend so many years being healthy and thin, making sure that you didn’t die from COVID or heart disease, but then land up being killed by an oncoming Lexus.