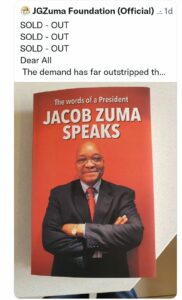 The first draft of this column was an attempt to ask readers to “zoom out” and to look at the year from a distance. The idea was to juxtapose December 2021 with December 2020 and highlight how much to be grateful for. It was I think, a convenient way to illustrate how difficult it is to have perspective when in the thick of it all, but how different things appear if we are able to compare year on year.

Last year December I was angry. The 2nd wave was crashing ashore, beaches were being irrationally closed, other countries were getting ready to vaccinate their population whilst we scrambled to get our act together. We were frustrated, scared and unconfident that we had the leadership to take care of us when we needed it most.

This December I am grateful. The 4th wave is already ashore, but beaches are open, along with my family I am vaccinated, and in many ways, we have our act more together than other countries who seem to be behaving more irrationally than even we could have imagined. We are largely content, confident and despite their many imperfections, as far as Covid is concerned, South African leadership has done what was required to take care of us.

The difference a year makes.

It doesn’t mean that 2021 was a roaring success by any means. South Africans will not remember the year with much fondness. The continued Eskom blackouts, the July riots slash insurrection slash coup slash who-knows-what-that-was, relentless ANC corruption, increased emigration, service delivery failure, increased kidnappings, unemployment, and lackluster economy made it a difficult year in which to remain positive.

And yet, the July “Whose knows what” was stopped by South Africans who had enough, independent power production is a possibility, Jacob Zuma went to jail for 15 minutes and the ANC was sent the clearest message possible by losing most of the major metros across the country. With the focus on service delivery, voters made it plain exactly what it is that they were looking for.

That was the idea.

I was just getting into my stride when I saw a tweet about Jacob Zuma’s book “The Words of a President.”  It was from the Jacob Zuma Foundation themselves who gifted us with the tweet “SOLD-OUT SOLD-OUT SOLD-OUT.” And just like that, everything changed.

Because whereas of course being South African means finding ways to survive the corruption, hypocrisy, and dark Eskom nights, it also means being able to appreciate the lunacy of the place.

Aside from the fact that it is never a good idea to believe much of what Zuma or his foundation has to say, the fact that no one on the marketing side of this book thought that the term “Sold Out” might not be the best idea to use within a mile of the man, is magnificent. So much so, that a book about Zuma corruption might even go by that very name. “Sold out!” would be the perfect title for something Mandy Weiner might write when documenting the journey of yet another South African rogue. And yet, the JZ Foundation thought nothing of using the phrase. All that was missing was a byline “The numbers speak for themselves- because the President can’t,” and it would have been complete. A parody if ever there was one.

Clearly in South Africa, comedians don’t have to write material, they just need to hit record. Or use screenshot on their phones.

To survive as a South African is have forced perspective. It demands the ability to see the good in the terrible, to find the light in the load shedding, to zoom out to a distance in order to note the progress, and to value the honest amongst the corrupt. It is to see how far we have come, to celebrate the two steps forward, knowing there will be at least one move backward. It is to be grateful for our weather, for fellow South Africans and for the kindness and generosity of spirits that protects us from ourselves. It is to be grateful for each day. Even more than that, it demands an appreciation that we live in a theatre of the absurd that is tragedy and comedy all rolled into one. And that the one thing that Jacob Zuma and his party couldn’t take from us is our ability to laugh.

That said, it is amazing the difference a year can make.