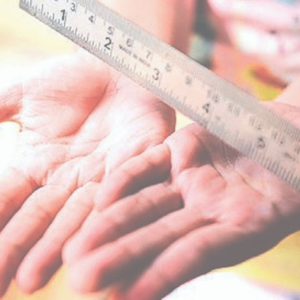 The South African Constitutional Court has upheld a ruling by the High Court that we are no longer allowed to smack our children. Whereas I have never been a fan of corporal punishment, I am concerned that the finding will edge us slowly and dangerously toward becoming a nanny state. Only without the ability to actually nanny.

I was not a child that needed a smack. And yet, there was an incident that took place that shaped my childhood.

When I was nine years old, I was unfairly called out at a line-up assembly and beaten in front of the teachers and all the children in the primary school. The principal called out my name, made me come to the front after which he took off his belt and hit me with it. It was 1977 and I guess we were a little aggressive back then.

The principal’s “charge” was that I had misbehaved on the school bus and in his wisdom, he decided that the only way this scourge of terrible behaviour would stop was if an example would be made. I was it.

To this day I maintain my innocence and to this day the memory of that experience remains vivid. What will also remain with me is the fact that my mother, on hearing the news, went to the principal’s flat, barged past his wife and proceeded to hit the unsuspecting man in the head for having laid a hand (or belt as it were) on her child.

It doesn’t take Freud to appreciate why when I became a parent, that corporal punishment would be the last resort. My wife shares this approach. With our youngest of our five children being 14 years old, we are pretty much through the age when a smack is even an option, but there were a number of times when they were young, that we would give them a smack:

When a young child runs into the road after being told not to, or climbs into a swimming pool area after being warned over and over not to, then as a parent, I believe that we have not only a right, but a duty to make sure that it never happens again. When a child of six looks at his mom and calls her a “bitch” because he is angry and has just learned the word, a smart sharp smack will ensure that he doesn’t venture there again.

And whereas I am certain that a heart to heart and the exploration of feelings is also a great option, I believe that none will eliminate the risk of recurrence like a measured ration of corporal punishment.

I recall one Saturday night when a friend at age 13 stole his parents’ car, got drunk and on returning it, drove through the garden fence and squarely into the swimming pool. He was lucky to have not been hurt, and so he climbed out the vehicle, dried himself off, climbed into bed and went to sleep.

When he woke up, he found his mother sitting at the edge of his bed waiting to speak to him. The memory of the night before came back to him and he was certain that life as he knew it was over. Luckily for him, however, his mom was a practicing child psychologist and so when she spoke, finally, after a lot of sighing and silence, she said, “Andrew, you must be very angry to have done what you did.”

He told me that on hearing those words, he knew that come next Saturday night, he again could borrow one of the family vehicles.

We live in an age of extreme understanding and fantastic sensitivity. Which is wonderful as long as the product of our sensitivity isn’t spoiled and self-absorbed and entitled children. I don’t believe that corporal punishment is the only prevention, but I do believe that curtailing parents’ choices limits their ability to parent properly.

I accept that corporal punishment can get out of hand. But making it illegal is akin to banning alcohol because there are those who drink too much, and like making sugar illegal because some of us eat too many chocolates. The point is that whereas I understand first hand the dangers around the subject, I believe that the Constitutional Court might well have stretched out its arm just a little too far.