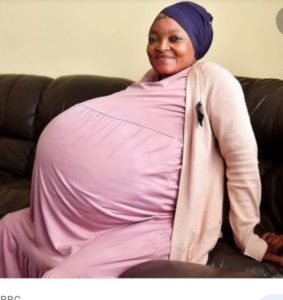 South Africans have always been a little prone to melodrama. We have made hyperbole our friend and have long embraced the exaggerated form. We do nothing in half measures and reject the “happy medium” as if it will bring shame to us, our families and our neighbors. Which is why it should come as no surprise that when one of us chooses to experience a multiple birth, that we go big and then we go home. Or somewhere.

The only mistake we made along the way, was to take the story seriously.

It is worth recalling that South Africa is the nation who introduced the world to the revival of the dead. In February 2019 a viral video of Pastor Alph Lukau showed him shouting “rise up” to a man lying in a coffin who then jerks upright to cheers from worshippers. It was a remarkable scene, never captured on film prior to this moment, when a man, seemingly dead, rose up out of his coffin (not one purchased at Takealot) and in no time at all returned to this world, just in time to claim UIF.

Not everyone (or anyone) was convinced by the authenticity of the event. Which is why other pastors, such as self-styled prophet Paseka “Mboro” Motsoeneng was said to have spirited himself over to the site of the resurrection in order to demand answers. He reasoned further that if the pastor really had the power to resurrect, that he should head over to Nelson Mandela’s grave and do the needful.

The incident, much like that of the decuplet birth, drew international attention and was covered by many international news outlets, including the BBC. This forced President Cyril Ramaphosa at that time to enter into the discussion by issuing the statement the government should curb “religious leaders of questionable practices” who took advantage of people. His implication seemed to be that taking advantage of people was the sole privilege of government and he didn’t want the church muscling in on this.

“We do not want to interfere with people’s religious beliefs” said the President, but we should have a conversation about how we deal with these bogus pastors,”

The same, I imagine, could be said when it comes to a motherhood. A woman’s body is her own, which is why if she chooses to have to 10 little ones at once, it’s hardly for us to stand in her way. But we do get to choose whether to believe her claim in the absence of anything other than the word of the man claiming to be the father.

It’s not only in matters of life and death that we go for broke. When we are racist, we introduce apartheid to the world, when we are corrupt we sell the country for billions and leave not a morsel behind. When we break the electricity grid we do so down to the last drop of wet coal, and when we decide that some vaccines need to be destroyed, we make sure that we need to destroy at least two million of them. It’s hardly worth getting out of bed for less.

Because as a country, that’s how we roll.

In December, 2019, Business Tech featured the headline “ South Africans are ‘renting’ bodies for funeral scams.” The article lists the number of false claims in the life insurance sector “South African life insurers detected 3,708 fraudulent and dishonest claims to the value of R1.06 billion in 2018, and a growing number of these fraudsters are ‘renting’ dead bodies for their scams. This is one of the major findings from a new report by the Association of Savings and Investment South Africa (ASISA), which show that the total number of irregular claims was lower in 2018 than in 2017”.

We have always been a bit melodramatic. Claiming deaths when there weren’t any and now births without the babies.

Although nothing to do with life cycle events, I always think Marelize and how much we were drawn to a story that wasn’t one. Bottom line was she was learning to ride a bicycle on an empty rugby field and she fell over. Her mom was with her and was proudly filming the milestone. Things however went awry when Marelize managed to steer her bike towards a rugby post and rode smack into it. With the camera still rolling, we could hear Her mom saying “ Oh f*k Marelize!” before the clip ends. The story went viral. And it did so because it captured our hearts and our imaginations. We identified with Marelize and as  South Africans we recognise that each of us is that girl on the bike, dramatically smashing into the very thing that we are trying our best to avoid. We also know that we can hardly help ourselves because that’s how we do things.

And I am not sure that we would have it any other way.

The story of Gosiame Sithole and the alleged decuplets is allegorical. We loved it because it was about children and babies, who are the future. It showed us that there is more to life than COVID and corruption. The facts are less important than the sentiment, and when tested was unable to stand up to any scrutiny. What is more important than what happened is that we cared, that we collected money, we worried and we argued with each other about it. What it reflects is that we still love a good gossip, we need to be distracted by the goings on in the country and that we adore being outraged. And there is nothing as enticing as an exaggerated tale of childbirth.

Personally, I can’t wait for the next one.