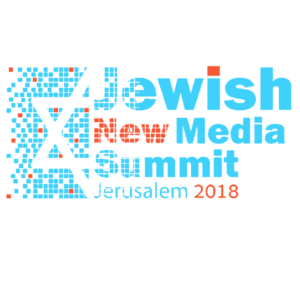 My Experience at the Jewish Media Summit 2018

It is entirely possible that the entire source of the conflict in Israel could be condensed into being one about food. It is also possible that I spent way too much time with the “Food Bloggers” at the Jewish Media Summit that took place this past week in Jerusalem.

To be fair, the focus on food wasn’t all their fault. With Jewish personalities from around the world, it was obvious to see the commonalities. At no time was it more apparent than when waiting to meet the Prime Minister, Benjamin Netanyahu. Lunch had been delayed in order to make the sought after meeting work. And yet, whilst we waited for his appearance, the main topic of conversation was not issues of Iran or foreign policy or BDS. It was lunch!

President Rivlin understood this well. Whereas I hardly recall him mentioning the Palestinian conflict, I do remember him telling us which foods each of his grandchildren enjoys… Incidentally, his Sephardic grandchild is the one who loves the more Ashkenazic “Gefilter” fish (thought you might want to know that). 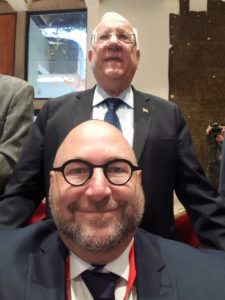 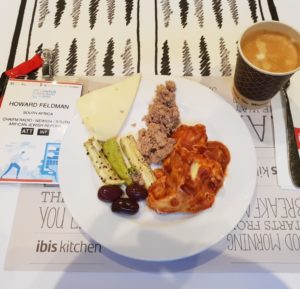 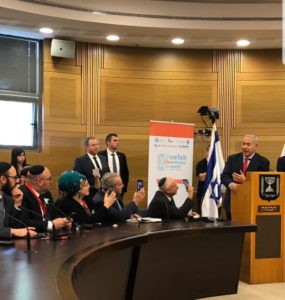 Food warrants discussion. On a food tasting walk through in the Tel Aviv market I learned about the Hummus wars. I had no idea that this was even a thing. But the hummus bar that we stopped at served as my introduction to this sticky issue. Apparently, there is a massive dispute in the region as to who is responsible for this healthy, protein filled, vegan delight. Truth be told I have no recollection who won. Because by that stage I was slipping into a pita inspired coma and might have even blacked out. Forget tequila, this stuff was power. I had no idea that carbs could do that.

Around 100 people from more or less 30 countries were invited to attend and engage in some of the issues that are currently being faced in the Jewish world. The summit followed closely on a year that had just seen 11 Jews gunned down in prayer in Pittsburgh.

The purpose of the gathering was to try and gain an understanding around the changes influencing media and the complexity of the relationship that Israel has with many Jews who are living in the diaspora. Focus included not only discussions around the dramatic rise in antisemitism but the issue of fair and balanced reporting with regard to the conflicts in the region.

The group was diverse and included editors, journalists, film makers, Instagrammers, radio personalities and of course the food bloggers. It was a festival of selfie opportunities, of witty Tweets and Facebook posts. And a time to meet new friends. Friends who face many of the same challenges and who do what they can to make the world a better place. I truly enjoyed this coming-together, to check in and to share.

It was fun. But it was also deadly serious. “You cannot feed a healthy Jewish body on a diet of tragedy”, was another food quote that summed up the last few days. But one that carries gravitas. Jews, it would seem, detest being perceived as victims and yet time and time again, find themselves in that position.

That Israel hosted the Jewish Media Summit means that there is recognition of the challenges. That more than 100 people chose to attend means that there is certainly a need and that the answers are not always simple. The world of media is diverse, it is immediate and is transparent. Accurate information needs to be accessible and fact-based support needs to be provided to anyone wishing to verify accuracy.

Times have changed. And are changing. And will change even by the time I have concluded this. It is obvious to say that we can no longer afford to wait for the morning papers to hear news of the sinking of the Titanic. Instead we need to know what icebergs lie in wait ahead of us so that we can avoid them completely. And so that the food bloggers will be able to Instagram the meal that is being served on the deck.

For more pictures of the Jewish Media Summit 2018 click here.