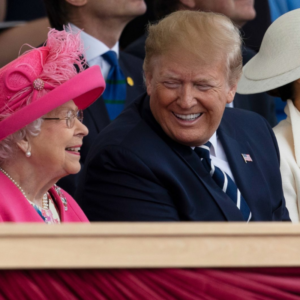 No good will come from this column. I am aware of that even before the words are formed. And it will matter not one bit that I repeat that I am not a die-hard Trump supporter, because anything construed as being remotely sympathetic towards the man will brand me as such.

I will write it anyway.

Donald Trump’s visit to the United Kingdom this past week has brought out the worst in us. I am honestly embarrassed by my social media feeds. You know the feeling of when you are alone in your car, listening to radio and a caller to the station makes you feel “squirmingly” uncomfortable. Even though no one is with you, you have the uncontrollable need to turn off the sound until you are certain that they are no longer talking? That’s how my timelines have made me feel.  The ugly memes, the childish jokes and jabs, the obsessive name calling is more reflection on us than it is on a man who we might or might not like.

It didn’t start this week. Ahead of his trip, Sadiq Kahn, London’s mayor made it quite clear that he was not welcome in the city or in the UK. He called Trump a “fascist” and authorised the launching of an orange blimp or balloon over the city. Needless to say, when Trump responded (as he unfortunately does), by calling him unintelligent and short, the Pavlovian response was to feign horror at the “classlessness” of the American President. Very few voices were courageous enough to say, “but hold on…!”

Pierse Morgan, columnist and Trump supporter penned a scathing response to Kahn’s behaviour. He asked if the mayor would have dared to behave this way towards any other world leader – leaders, like that of countries like China, with appalling human rights abuses. The answer was of course that he would not, and has not -proof enough for Morgan to suggest that the behaviour is hypocritical virtue signalling at its worse. And whereas I often don’t agree with Morgan’s view, I believe that in this case he is absolutely spot on.

The response that I received to my retweet of the Morgan article can be summarised as “well, Trump deserved it.” And that it’s not as if South Africans have shown any respect to our politicians, like Jacob Zuma in the past. The argument is flawed of course. Jacob Zuma has brought South Africa to its knees. He has crippled the economy and created a destitute nation because of his personal and obsessive greed. Donald Trump, on the other hand, love him or hate him, continues to put America first and is leading the country through what will be seen as one of the most powerful economic booms in the USA’s history. I might not like how he speaks, and I certainly am horrified by some of the statements he has made in the past, but it doesn’t mean that this is an unlimited license to behave, arguably, worse that he has.

What ever happened to taking the higher road? What happened to showing some form of hospitality, and dare I say, respect, even to someone we don’t like? What happened to respecting a democratically elected representative of an ally and the country that undoubtedly changed the course of English history twice during the 20th Century.

What happened to being able to control the child in us and to setting examples for how we expect our children to behave?

One of the more ridiculous posts that polluted my Facebook feed was a photo taken from the outside of the palace. It was a picture of Ivanka Trump and Jared Kushner as they gazed out of the window. They could of course have been watching a parade, a crowd or a budgie caught in a sandstorm, but instead the author of the piece chose to describe how the couple, devoid of souls were caught staring into nothingness. It might have been an attempt at humour. I genuinely have absolutely no way of knowing but I could not find it even remotely amusing.

On the face of it, Trump’s trip seems to be positive. The body language displayed at all of his meetings and engagements (aside from Prince Harry who appeared horribly uncomfortable) was relaxed and natural. The queen herself, though clearly a master of this, looked to be genuinely amused by the visit. Melania Trump looked exquisite in every frame and added to the success of the visit.

Perhaps an alternative motivation for better and less vicious behaviour is to think of ourselves and of our children. We need to be cognisant of the fact that our ugly behaviour reflects more on us than it does on anyone else. It models behaviour that we most likely do not want our children to follow and we need to be aware that today it might be Donald Trump, who we might or might not care about, and that we treat this way, but tomorrow it will be someone that we do.