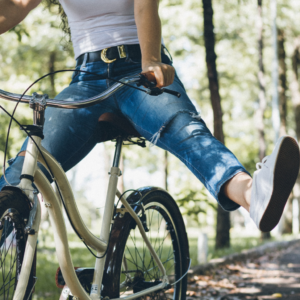 The field might be empty. The weather might be perfect. But somehow when we get on the ‘bike’ the very thing that we want to avoid is exactly what we are attracted to, writes Howard Feldman.

I am guilty of laughing that little bit too hard when teenage Marelize magnificently steered her bicycle into a rugby post.

The field was empty. There appeared to be no adverse weather conditions on the day. There were no force fields and no one was telling her to do it. And yet, somehow Marelize was drawn to those poles as though possessed.

Anyone watching had little doubt as to how this movie was going to end. The sound of clanging metal as she and her bike connected with the metal was not all disappointing. Nor was the image of Marelize herself as she graciously took flight through the air, over the handlebars.

It could have ended there, and it would have been enough for those of us who find it inexplicably funny when someone trips. And yet still, Marelize’s mom, who was, no doubt, proudly filming the talented rider, rewarded us for our patience. “My fok, Marelize!” she exclaimed in an exasperated voice, before dropping the phone and hastening to her daughter’s aid.

The brilliance is that we never get to meet mom. She remains the voice behind the camera and we are left wondering what her facial expression looks like as she watched her daughter ride her bike into the goals on an empty field. Like Charlie of Charlie’s Angels, her voice dominates but we never get to see the face behind the camera. Her tone, however, is enormously expressive and suggests that this is not the first pole Marelize has ridden into. By all accounts, it suggests that it is unlikely to be the last.

We have been assured that Marelize had not been hurt during the making of this video which allows us to find it all the more humorous. As does the “My fok, Marelize!” which has since release, become the most used, truly South African expression of the last few weeks, fast outpacing almost any other “South Africanism”.

There are a whole number of reasons why this video went viral. Many have suggested that it took our eye off the serious business of being South African in a post Zuma world. Others have suggested that the exasperation and the “My fok, Marelize!” is the first expression that accurately captures what we feel when trying to describe Eskom, the Guptas, Bosasa and so on.

I would like to suggest that there are a few, more universal options:

– We are all Marelize: The field might be empty. The weather might be perfect. But somehow when we get on the ‘bike’ the very thing that we want to avoid is exactly what we are attracted to. Somehow, it’s all that we see. We can’t help ourselves. There is so many reasons that we should not go anywhere near those rugby posts. And yet, almost without control, that is exactly where are drawn. And as we crash into them, and as we go flying over our handlebars, we wonder, how it was even possible that we are flying through the air, after having connected with the very thing that we have worked so hard to avoid?

– We are all mom: We are surrounded by people who we care about and who we worry about. But as much as we want to help, we know that they have to steer that bike themselves. We know we can’t ride it for them. We even know what their obstacles are but there is so little that we can do. Other than to stand on the side, to mutter “My fok, Marelize” before hurrying to pick them up, to reassure them that they are okay, and to make sure that they get back on that bike. Or at least encourage them to do so.

Whatever the reason, the sight of Marelize sailing into the rugby goal post captured South African social media and the hearts of the country. Memes are still being produced and the expression has safely made its way into the South African lexicon, along with “just now”, “Eish” and “Ag shame!’ And there it shall remain.

Best of all, it reminded us of how unique and funny and quirky we can be. And that, of course even if we do fall, we can simply get up, and get back on.

This article was first published on News24.